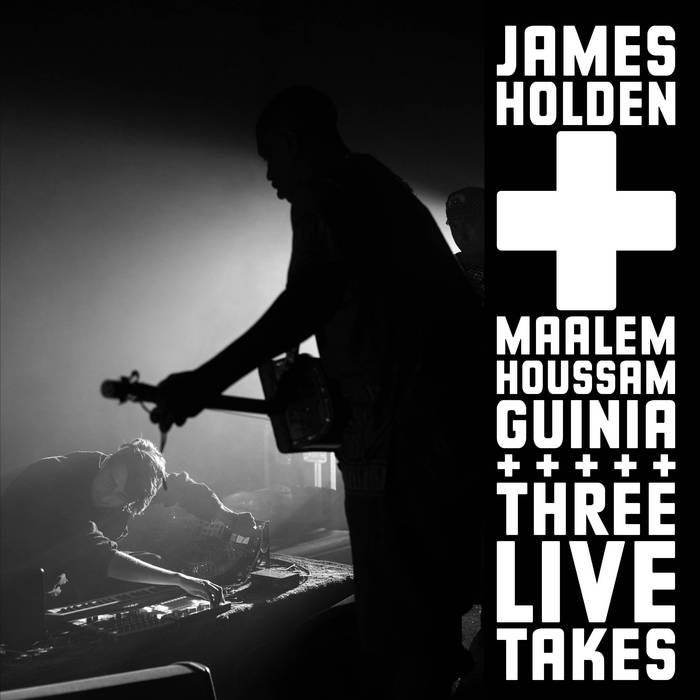 Modular synthesizer meets Morocco’s Gnawa tradition as UK synth guru James Holden teams up with the Maalem Houssam Guinia, son of the late Gnawa legend and previous Holden-collaborator Maalem Mahmoud Guinia, for a trio of live collaborations recorded at Holden’s studio during the Guinia band’s first trip to London back in 2016.

The original 2014 Marrakech residency which paired up James Holden and Floating Points with legend of Gnawa music Maalem Mahmoud Guinia – as documented in the electronic-Gnawa collision of 2015’s collaborative Eglo and Border Community release, the Marhaba EP – would turn out to be a pivotal moment in reformed DJ James Holden’s career. Having recently immersed himself in the challenges involved in the authentic and meaningful live performance of electronic music with his own new live show (assembled in the wake of his 2013 album The Inheritors), the makeshift poolside recording sessions where Holden and Guinia met – where music was the only common language that anyone could speak with any degree of fluency – threw up a new set of challenges. How to integrate the complex, but nonetheless automated and fixed, arpeggiators of his modular synth with the fluid, expressive and responsive live performance of the accomplished guembri and krakeb players?

Little did anyone know that this would also be one of the last recordings that Maalem Mahmoud Guinia would ever make. In August 2015 he sadly passed away at the age of 64, ceremonially passing his personal Guembri (traditional three-stringed bass lute) over to his son Houssam during his final performance at the annual Gnaoua festival in their home town of Essaouira earlier that summer. Formerly contributing krakeb percussion and vocal response as part of his father’s band, Houssam has now stepped to the forefront as band leader in his own right, assembling his own percussive troupe (which also features his elder brother Hamza on krakebs) to continue the Guinia musical dynasty with performances across Morocco and beyond. (Maalem Houssam Gania & The Gnawa Of Essaouira are set for a return visit to the UK on 14th October when they will perform alongside Terry Riley & Gyan Riley at Tyneside’s Sage Gateshead as part of the 2018 edition of the Tusk Festival).

It was an invitation from The Hague’s similarly forward-thinking Rewire Festival which would then provide the opportunity for Holden and Guinia junior to continue their collaboration, picking up where the ‘Marhaba EP’ left off with an intensive two day rehearsal in The Hague followed by a joyous live performance at the 2016 edition of the festival. Shows in a picturesque terracotta ampitheatre in Marrakech (as part of the Atlas Electronic Festival) and a sold-out performance at The Barbican’s LSO St Luke’s converted church venue in London soon followed. It was during this short stay in London in September 2016 that Holden seized upon the opportunity to record their collaboration for posterity, squeezing in a quick rehearsal-cum-recording-session at Holden’s studio on the evening before the show, the results of which you see before you.

Lead track ‘Pass Through The Fire / Bouri Bouri Manandabo’ will be partially recognisable to fans of Holden’s recent album The Animal Spirits. Originally conceived as a direct response to Holden’s new-found knowledge of the distinctive complex rhythms of Gnawa, an early version of the trippy, hypnotic arpeggios of soon-to-be-album-track ‘Pass Through The Fire’ was played to the Guinia crew, who offered up the refrain of Gnawa traditional ‘Bouri Bouri Manandabo’ in response, thereby completing the collaborative circle. Meanwhile in the genesis of the two B-side offerings the exchange was reversed: the starting point was Gnawa standards ‘Youmala’ and ‘Baba Hamouda’, to which Holden would add modular synthesizer contributions inspired by his own European electronic trance music heritage. Thus the affecting, sonorous ‘Youmala’ is evocatively underpinned with a shimmering hazy pad progression, whilst the energetic ‘Baba Hamouda’ receives a disorientating injection of frantically cycling organ arpeggiation.

The lasting influence of this encounter with the Gnawa musical tradition has undoubtedly left its mark on Holden’s own music. Both his new-found working knowledge of their powerful way with rhythm and arrangement and his delight in the sheer joy of communal live group performance are written all over his 2017 album ‘The Animal Spirits’, a continuation of his experiments in integrating live electronic musical performance with traditional instruments which coincidentally also saw Holden step forward to assume the role of band leader to his own five-piece ensemble. Ultimately it is these similarities – rather than the pursuit of the exotic or the other – which lies at the heart of this type of collaboration: “I love Gnawa music and I think it has a lot in common with the feelings that are in the other music I like, like minimalist classical or even trance music, European trance,” explains Holden. “It’s the same hypnotic feeling. We understand the shape of the songs.”